A New Administration: U.S. Foreign Policy and the Kurds

A New Administration: U.S. Foreign Policy and the Kurds 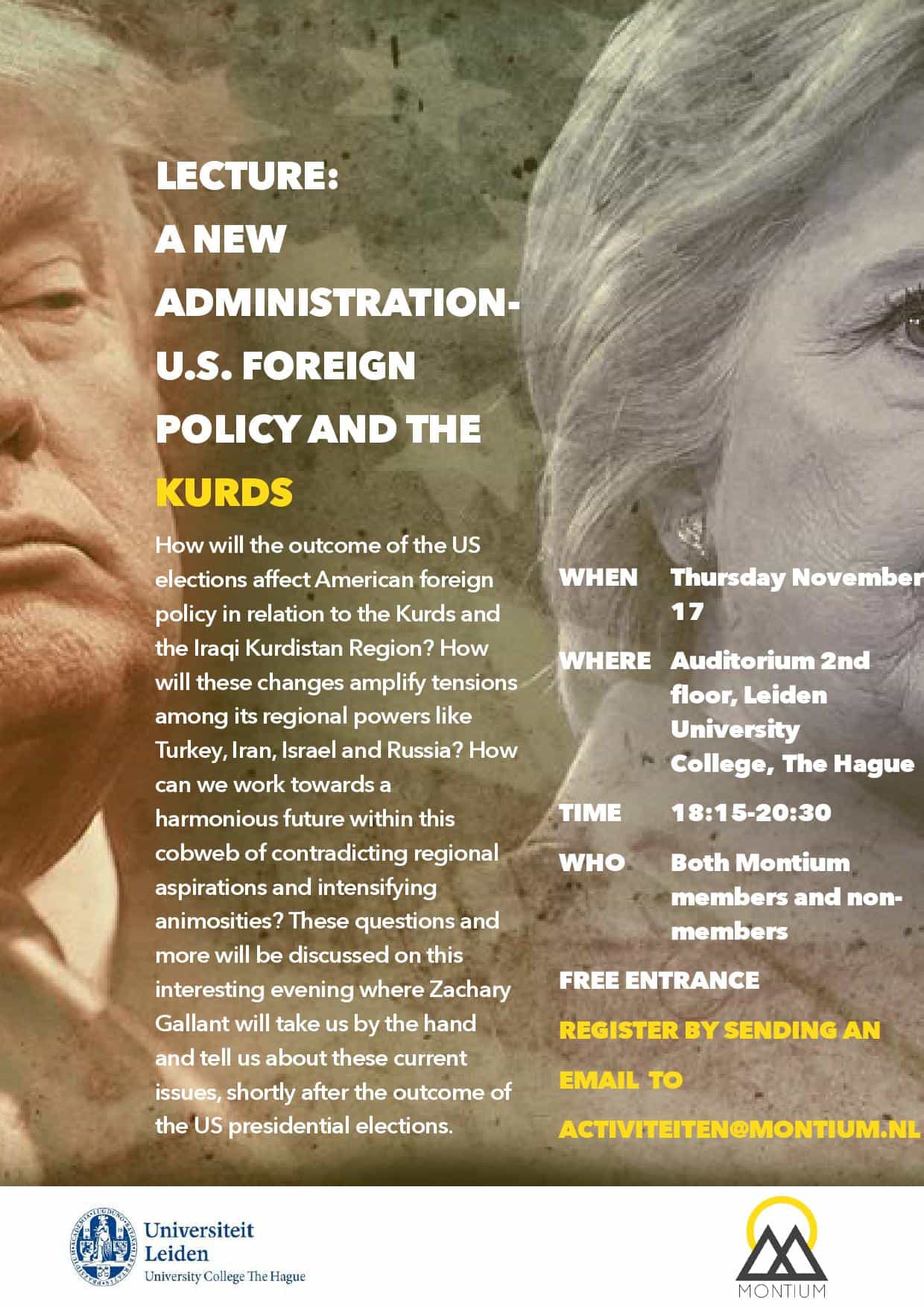 How will the outcome of the US elections affect American foreign policy in relation to the Kurds and the Iraqi Kurdistan Region? How will these changes amplify tensions among its regional powers like Turkey, Iran, Israel and Russia? How can we work towards a harmonious future within this cobweb of contradicting regional aspirations and intensifying animosities? These questions and more will be discussed on this interesting evening where Zachary Gallant will take us by the hand and tell us about these current issues, shortly after the outcome of the US presidential elections.

A light will be shed on the Balkans, subaltern and other unrecognized nations, drawing parallels to the complex Kurdish issue: a nation of 40 million without a state. The US-Kurdish relations will be analysed from Paris 1919 to Joe Biden in 2016. A prognosis will be drafted regarding the short and long term US policy on the Middle East, with a primary focus on the wider Kurdistan Region and the independence aspirations of the Kurdistan Regional Government. In parallel, post-Yugoslav independence and autonomist movements will be assessed, since Mr. Gallant has personally worked on constitutions and independence declarations of aspiring but unrecognized states in the region

The seminar also includes the difficulties and with a lobbying consortium in London, the Council on Transitional Justice, which attempted to garner support for the causes of the Sri Lankan Tamils, several post-Yugoslav ethnic minorities who were victimized, and other members of the UNPO.

Zachary Gallant is a former political organizer for Democrats in the USA, working as a consultant for President Obama’s 2008 campaign and for US Senator Ben Cardin (Vice President of the OSCE’s Parliamentary Assembly). Author of “The Forgotten War Crimes: State Sovereignty, Ethnic Cleansing and the Autonomist Revolution” and “War: A Children’s Book”, Gallant currently works as a refugee integration teacher in Germany, as well as a guest lecturer at M.A. level in Berlin on Jewish Concepts of Peaceful Coexistence, and throughout Germany on the Jewish Refugee Identity and its moral and political implications on the modern refugee crisis.

– REGISTER –
Please don’t forget to register by sending an email to Activiteiten@Montium.nl, and please indicate if you wish to buy a signed copy of Mr. Gallants book.

WHEN? November 17, 18:15-20:30 pm
WHERE? Auditorium 2nd floor, Leiden University College, The Hague (next to The Hague Central Station, opposite to New Babylon)
FREE ENTRANCE!